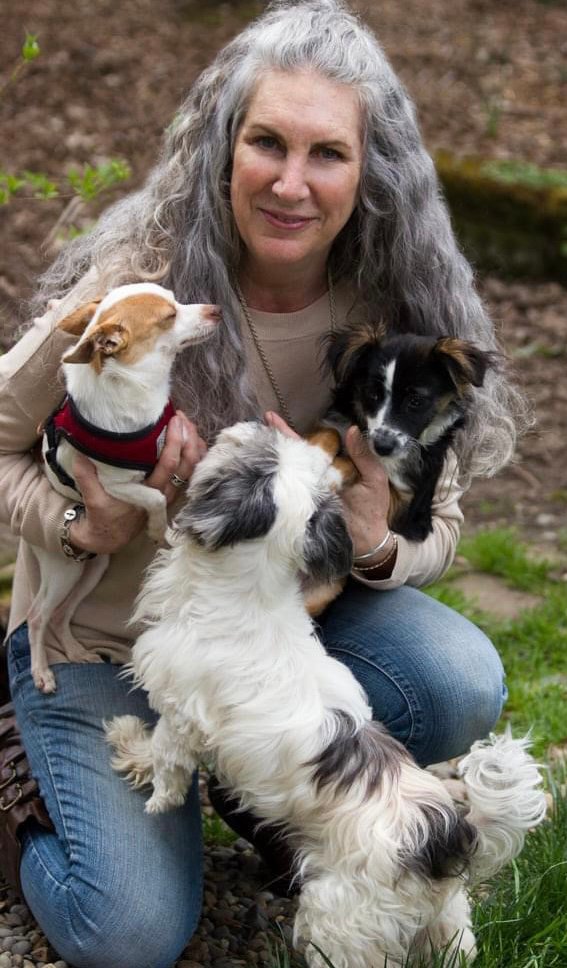 Heather Hines grew up in Southern California and began her involvement in animal welfare during the early eighties, following a childhood calling of rescuing injured and homeless animals. After moving to Oregon in 1991, she became more involved in organized domestic animal rescue efforts, eventually co-founding both the Cat Adoption Team and Indigo Rescue in 1998.

Heather not only develops and initiates Indigo’s key programs; she serves as Executive Director, managing fundraising efforts and soliciting volunteer involvement. As the lead adoption counselor for Indigo Rescue, Heather stresses the importance of making compatible matches, coining the phrase “Consider us the match.com of people and pets.” As part of her daily efforts, Heather networks and gathers new support for the organization and its programs. She also spends a great deal of her time promoting community responsibility, consulting with people on how to overcome the reasons they believe they need to give up their pets, and working with independent rescuers on providing shelter and care for rescued animals until they can be safely placed in new homes.

Heather proposed and helped develop and coordinate the launch of the onsite spay/neuter program at Washington County Animal Services, and the shelter’s volunteer dog walking program to help train dogs and provide increased public exposure. At home, she fosters for Indigo Rescue and continues with her passion for rescuing and rehabilitating injured or ill animals, providing a combination of traditional medical rehabilitation and natural therapies during their recovery. 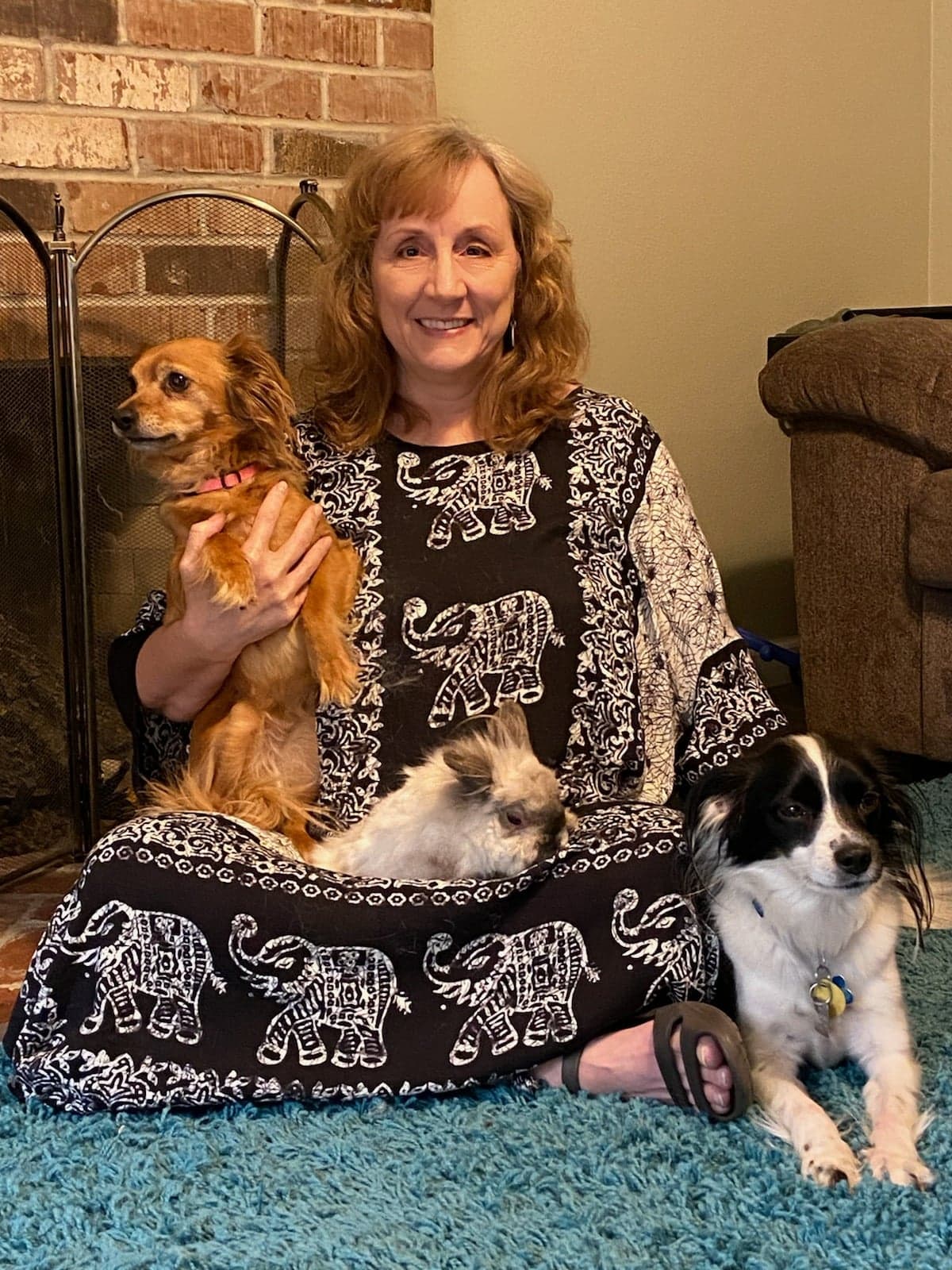 Tracy Love-Silver is a semi-retired philanthropic advisor, trainer and speaker with more than 30 years of resource development and donor relations experience on both ends of the philanthropic process. She has served as program director, ED, board member, volunteer, consultant & founder in organizations that range from the 7th largest charity in the nation to grassroots start-ups.

Tracy moved to the Metro Portland region in 2010 and has been a volunteer with Indigo for the past 8 years, including pro bono management consultant, communications, foster parent and board member. She has also adopted two dogs and one cat from Indigo—all, very happily, foster “failures.”

Working in programs for at-risk adults and children, Tracy directed and founded organizations aimed at people who were falling through the existing social service safety net. With a lifelong love of animals, she gravitated naturally toward Indigo’s focus on animals that were in essentially the same position—wonderful, unique animals with issues that make them “unadoptable” in the conventional rescue world. She knows from experience that animals with unique needs can make perfect, one-of-a-kind family members.

As Board President, Tracy is excited to use her knowledge of nonprofit management to help Indigo meet the challenges and needs of special animals in this area long into the future. 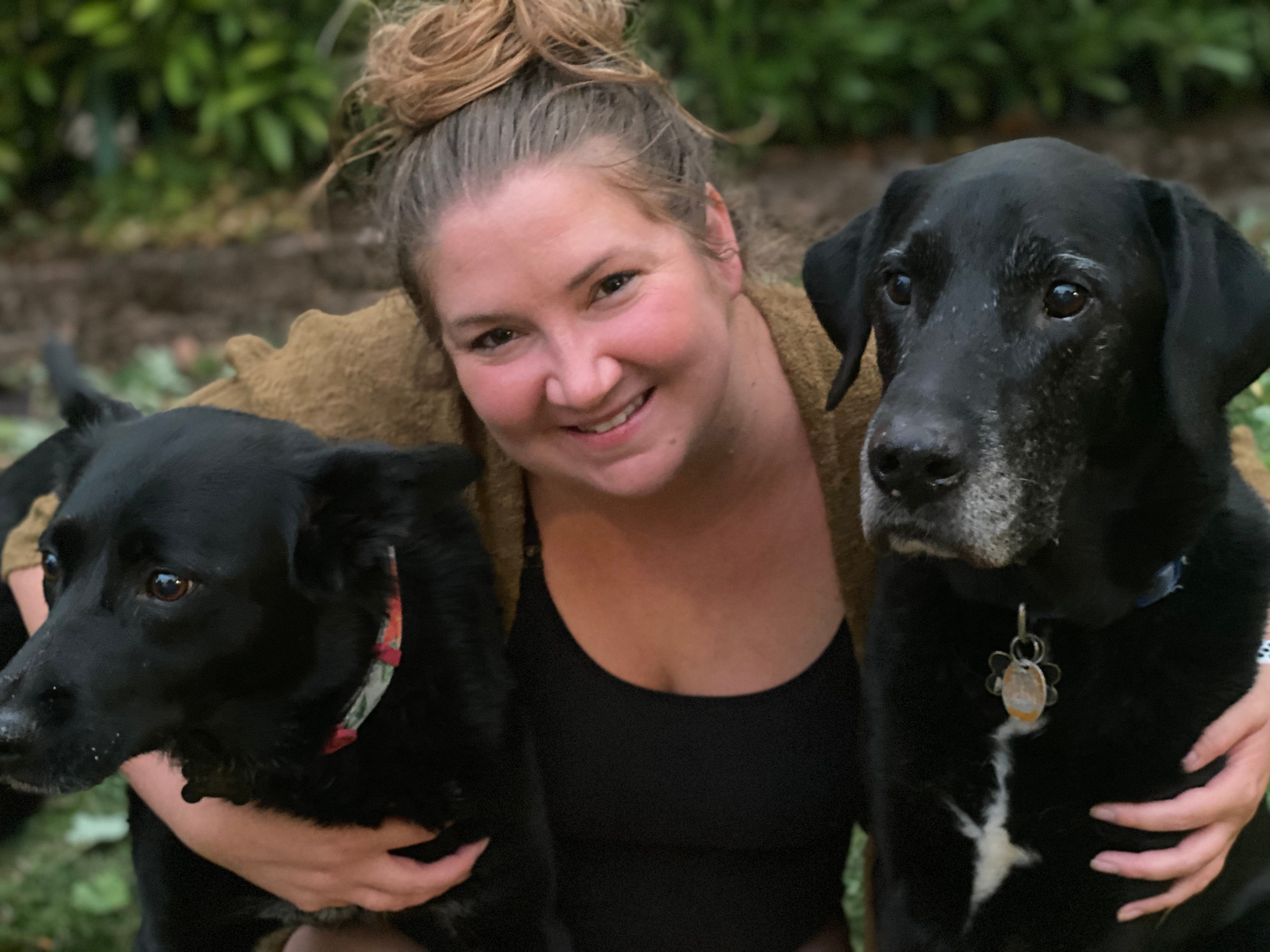 Rachael Fishel grew up in Memphis, TN, and attended the University of Memphis. She moved to Portland in 2006, married a native Oregonian, and has two wonderful animal-loving daughters, two rescued dogs, two adopted cats and some fish.

Rachael grew up around animals, and started rescuing kittens as a teenager–with her go to line, “But mom, this kitten just needs a home!” effective every time. Rachael and her husband nursed their first rescue dog through parvo, and gently helped their second rescue dog learn to trust people again.

Rachael has worked as a Program Manager at her current position for the past 8 years, with expertise in Human Resources, operations and recruiting. She is a problem-solver and resource manager. As a new board member with Indigo Rescue, Rachael is excited to apply her organizational and management skill set to help Indigo grow and continue to provide for the many, many animals in need.

Rachael’s dream job would combine animal rescue with a Christmas tree farm and a pumpkin patch! 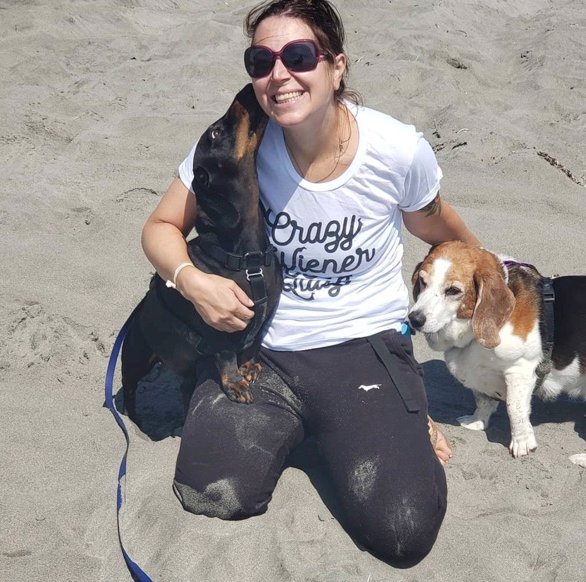 Christy Caplan grew up in Cleveland, Ohio and graduated from Indiana University with a degree in journalism. Since 1995, Christy has worked as a PR practitioner at PR agencies, held PR manager positions at a variety of companies and currently owns her own PR boutique agency, Sundrop Media in Portland, Oregon.

Christy realized her passion for animals when she adopted her first dog, Jack - emaciated and flea-ridden - discovered under a car in Los Angeles. Years later she adopted a second dog from a local Portland rescue and then became familiar with Indigo Rescue when adopting her third dog, Bruiser. She currently lives with three hounds and has a special place in her heart for Indigo Rescue and their mission to end animal abandonment and pet overpopulation in our community. What makes Christy’s pulse race at the end of her day is coming home to her three adopted hounds.

As a board member Christy is excited to ensure Indigo Rescue continues to thrive and OCU at Indigo Ranch is on everyone’s radar as the premier boarding facility for the community’s four legged friends. 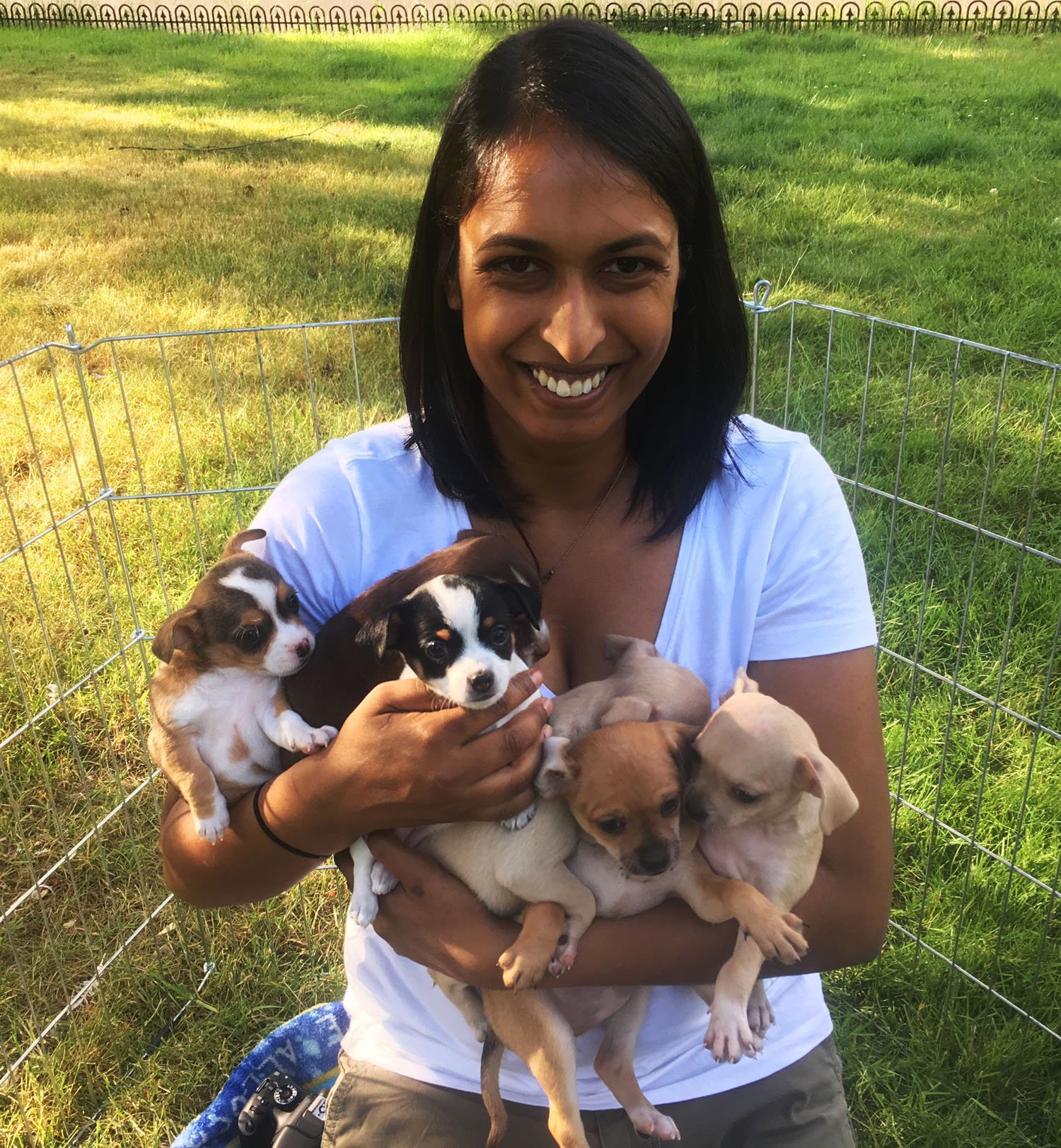 Himani Wickramanayake grew up in the Pacific Northwest and attended Whitman College where she studied Latin American studies. But when illness forced her to take time off from her projected career path, she decided to volunteer at an animal shelter and become a foster parent as a temporary pastime.

That turned out to be a life changing experience. Her first foster dog, Herman, needed so much behavioral rehabilitation to overcome a rough start in life that Himani began educating herself in animal behavior, dog training modalities, and supportive care to be the person Herman needed her to be. In doing so, she found herself becoming the best version of herself and found a passion for dog training and animal rescue that would shape her life from that moment forward. Herman, her first foster-fail, is still her best friend and ally in rehabilitating rescue dogs.

Himani loves a challenge and likes helping dogs who need a little extra time and understanding to blossom, and she found kindred spirits in that mission volunteering with Indigo Rescue. 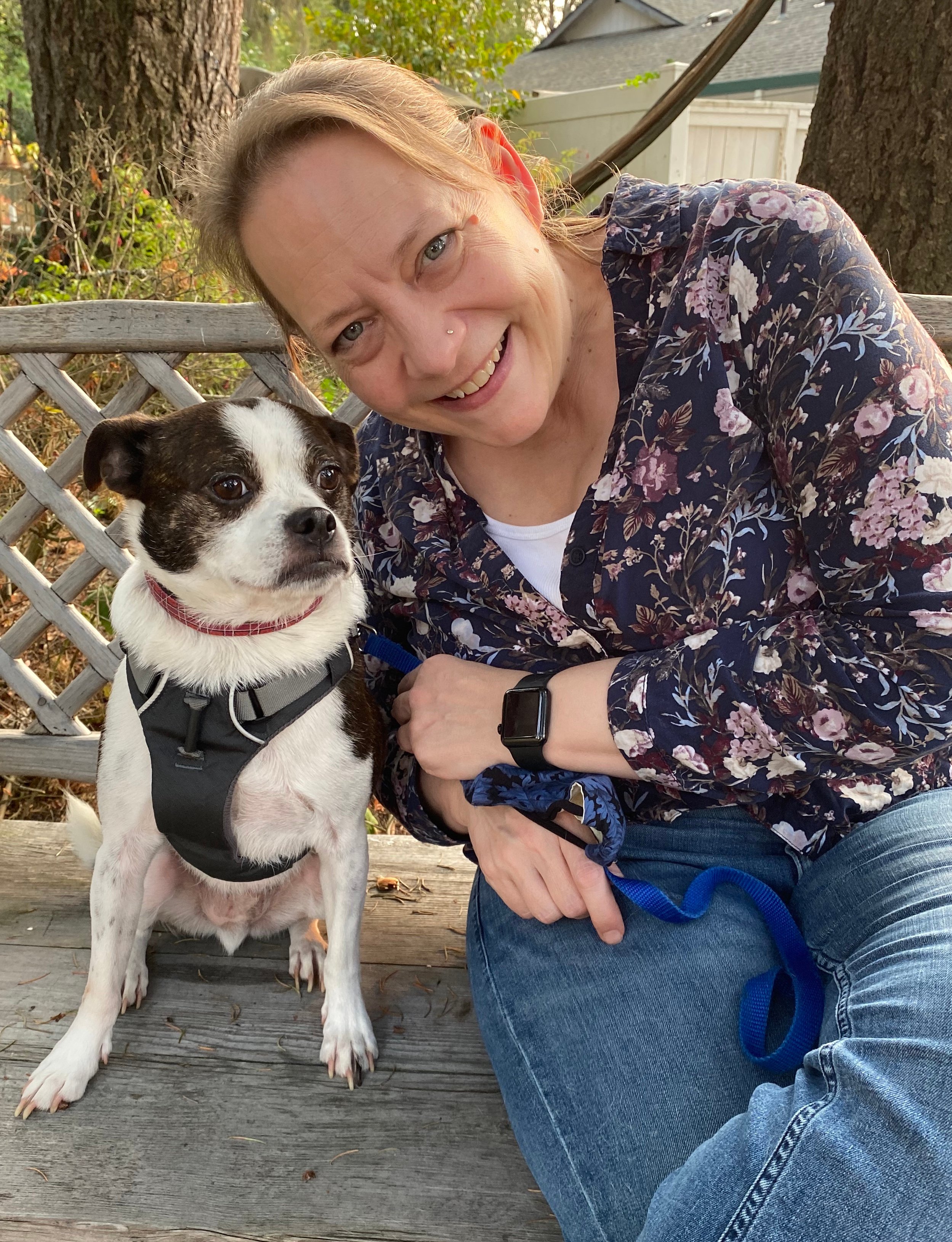 Kristina is a native Oregonian. Her early years were spent on a small farm in Orenco, Oregon. Surrounded by animals from an early age, Kristina developed a love for all animals and has in her life nursed baby birds, mice and even rescued 3 baby opossums after their mother had been hit by a car which she and a neighbor bottle fed several times a day until they were old enough to eat solid food.

A chance search through her employer’s classified ads brought her to an ad about a dog that needed a second chance at life through a foster home. The need to help this animal find a forever home was immediate and Kristina contacted the person who posted the ad to sign up as an Indigo foster.

Throughout the years that Kristina has fostered animals for adoption, both of her son’s have also shared in the joy of giving an animal a second chance at life. Through them she hopes to carry the wonderful message of adoption and spay/neuter instead of buying from a breeder into the next generation.

Kristina brings her professional problem solving skills as a Global Logistics Manager to the Indigo board.

Kim Carty grew up in Forest Grove, OR. She graduated from Pacific Lutheran University in Tacoma WA and Northwestern School of Law of Lewis & Clark College in Portland, OR. Kim opened her solo law practice in 2000 and performed contract work for other local attorneys, writing briefs and memorandums for Oregon courts before transitioning into real estate. Since 2003, Kim has been a broker for John L Scott in Beaverton, OR and a licensed attorney, assisting her clients with real estate matters.

Kim and her husband, Matt, both had childhood pets growing up, so adopted two pugs that were their first “kids”. A few years later, they adopted a Boston Terrier named Gucci. This little alpha female soon ruled the house and won everyone over despite the fact that she has a spinal condition which requires her to wear a diaper. Gucci’s adoption prompted Kim and Matt to become more involved with animal rescue organizations and have since fostered dogs for Indigo Rescue.

When not working or playing with her son or the four-legged kids, Kim enjoys working out, golf, running, movies and reading. 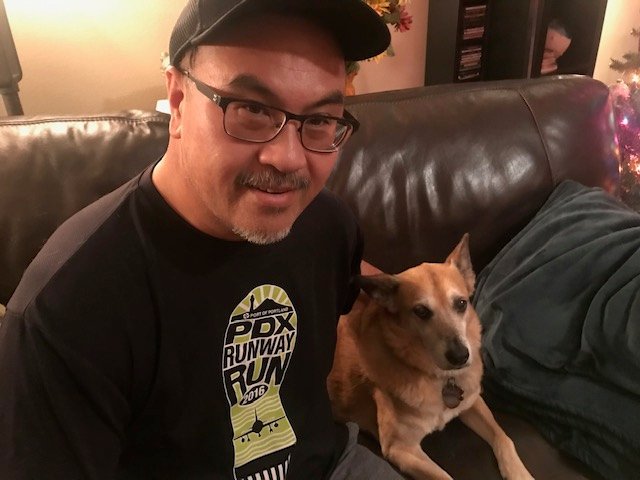 John Borromeo is new to the Indigo Rescue Board, but has been involed with Indigo Rescue since his family moved to Portland the San Francisco Bay Area in 2005. John is a Quality Assurance Auditor, working in clinical laboratory and medical device environments. Prior to his Quality Assurance work, John has held office management and human resource positions in education, retail, and health care. He has a Journalism degree from San Francisco State University.

John was exposed to Indigo when his family adopted a pair of dogs in 2005. “We thought we would get one dog for our son as incentive to get him motivated to relocate to Oregon. That idea ended when we adopted Nikko and Yoshi from Indigo. They were a bonded pair, and we were told that for their welfare, they could not be split up. So, we went from never owning dogs to having two. Since then, we have embraced dog ownership with a passion,” said John. Sadly, Nikko and Yoshi have since passed, but John now has Lola and Maisie, both rescues. ​ Over the years, John and his wife, Melissa, have been regular volunteers with Indigo – washing dogs at the summer dog wash fundraisers, pouring beer and staffing the puppy kissing booth at the Portland International Beerfest, selling jewelry, and coordinating the Indigo Rescue Run/Walk team at the Run for a Cause fundraiser. John is excited at being a part of Indigo Rescue’s efforts to grow and evolve as an organization. 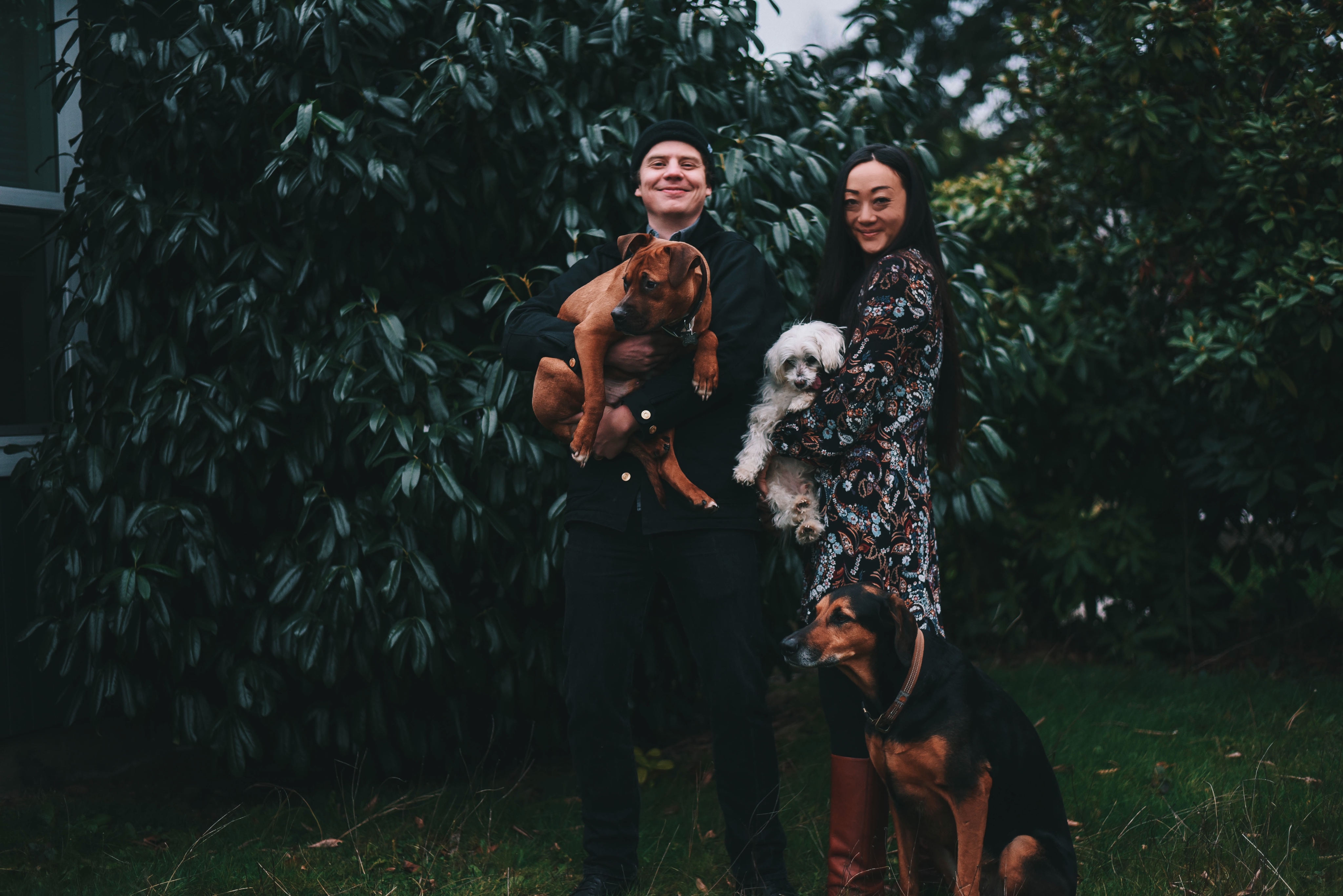 Ming Chou grew up in Boise, ID. In 2008 she moved to Oregon to attend Portland Community College and studied photography and multimedia. Growing up Ming always had dogs and when she was 19, she took in a Maltese named Ricky. Ricky was the love of her life and they spent 14 wonderful years together. After meeting her husband, they adopted a sweet Hound mix named Bean and a hilarious Pitbull named Pijou. Along with her pups, she has a passion for raising her flock of chickens. Ming would adopt all the animals in the world if she could!

Ming currently works for the North Clackamas School District as a Field and Facility Use Administrative Assistant and in her free time, she enjoys cooking, photography, painting, camping, and hiking with her family 4 legged family.

As a board member, Ming is looking forward to using her social media skills to help the rescue gain more exposure and to help promote the rescue’s mission with visual content. 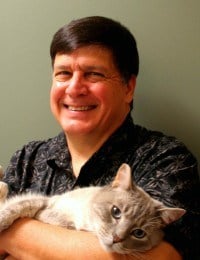 In addition to being the veterinarian for Indigo Rescue, Dr Mark served as Indigo’s immediate past president. He has fostered and adopted one of his dogs from the organization. He also hosts and participates in fundraising activities and events. 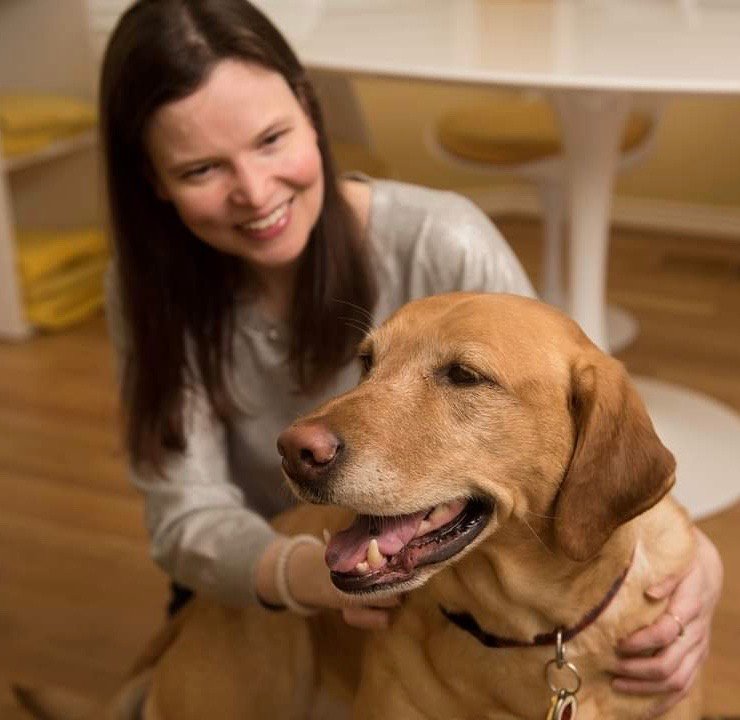 Nicole Schaefer was born in Los Angeles, California. From a very young age, she loved animals and would often try to hug every dog she met. Nicole was fortunate to be surrounded by all kinds of animals while growing up, including dogs, cats, rats, and tortoises.

Nicole attended Scripps College in California and then attended Lewis and Clark Law School in Portland. She graduated with Certificates in Animal Law and Criminal Law and Procedure, as her original plan was to prosecute animal abusers. Instead, Nicole worked for various firms doing mainly family law until she started her own law firm - Yellow Dog Legal. Yellow Dog Legal was named after Nicole’s dog Maggie Rocket. Maggie came from Indigo and is a therapy dog at St. Vincent’s Hospital. Nicole decided to name her firm after Maggie because Maggie represents kindness, protection, and loyalty- all traits Nicole wishes to offer to her clients. Nicole practices Trademark law primarily, but also practices business law, and of course- animal law.